Finishing up my internship here in the Special Collections Processing Center before moving on to digital humanities, I was given yet another little gem of a collection, the William R. Mathews papers. Even though this collection consists of no more than one skinny box of correspondence, I was so fascinated that it took me two days to finish just because I had to read them all. There are two very notable things about this box. The first is that the correspondence is largely complete: that is, I have both sides of the conversations, organized by year, many of them direct replies to each other. The second is who wrote them.

The letters fly back and forth between the editor of the Arizona Daily Star, William R. Mathews, and John Foster Dulles, the U.S. Secretary of State under President Dwight D. Eisenhower from 1953 to 1959. They chart the friendship between the two men over nearly seventeen years, from Dulles’ first formal letter to the editor in 1941 to the last in 1957, followed by a few more letters over the years to and from Dulles’ widow. The letters reference visits and calls between the two and their families as well.

From the first “Dear sir” on January 31, 1941, to the last “Dear Foster” on July 19, 1957, the letters show the meeting of two powerful minds, bent towards the same subjects and with many of the same ideas. Dulles and Mathews discussed everything from the role of Christianity and the church in American politics to the Allies’ policies around Germany, the Berlin blockade, and the later Bikini bomb experiments, which Mathews witnessed.

Mathews often advises Dulles on what he thinks Dulles ought to do, up to and including advising him about what he thought Thomas E. Dewey should do as Presidential candidate. He comments on and critiques Dulles’ and Dewey’s speeches, and the two also exchange and discuss each others’ publications and pamphlets, some of which are included in the collection.

The final jewel in this crown is Mathews’ diary of the beginning of the Korean War. He was in South Korea and Japan at the outbreak of the war as a journalist, and kept a fascinating record of what he saw and heard there, as the Americans went from “this will be no problem, we know exactly what’s happening,” to “what on earth just happened?!”

The moral of the story, folks, is “don’t hesitate to write a letter to the editor, you might end up with a lifelong friend.” 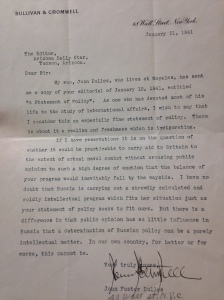 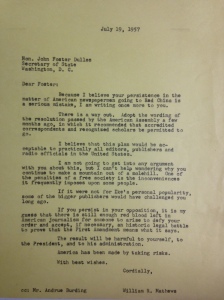