After the Comstock Act (named after famed anti-obscenity crusader Anthony Comstock) was passed in 1873, it became illegal to send any material deemed “obscene” through the U.S. Postal Service. Comstock, from his position as a special agent for the U.S.P.S., became a one-man arbiter of whether a given piece of material was or was not appropriate for transportation through the mails. Comstock was a conservative New England fundamentalist who saw evidence of sin in almost everything, from the obvious (contraception) to the less obvious (dime store novels for teenagers). He also censored any material which dealt explicitly with sex education.

From the Act’s inception, reformers petitioned for its removal. They attacked the Act on several fronts. Why was the opinion of one man (Comstock) sufficient to decide whether something was or was not “obscene?” Why should the private decisions of married people to purchase contraception be subject to invasive action by the government? And why should educational material concerning human sexuality be deemed obscene, if its intent wasn’t prurient, but instructional?

The question of intent makes this last question particularly complicated. This month, as I processed the Jay A. Gertzman research collection on censorship, a research collection focused on the prosecution of “obscene” literature, these complications came into stark relief. Because we live in a time in which censorship laws are significantly more relaxed than they were in the beginning of the 20th century—and because the Comstock Laws were also used for more sweeping repressive measures, like restricting the sale of contraception—it can tempting to view the battle over obscenity as a battle between virtuous free-speech advocates and fear-mongers. In such a narrative, Comstock’s obsession with prurience silenced many decades’ worth of common-sense sex education.

But this narrative ignores the complexity of how “sex education” was packaged and sold to Americans in the first part of the 20th century. Because education was a vector by which erotica could sometimes be smuggled through the censors, it often served as a vehicle for prurient (and sometimes grotesque) content. And, in cases where the intent really was educational, the kind of education presented could have grotesque implications of its own.

For example, there was a distinct link between sex education and the eugenics movement. One book in the Gertzman collection, “Safe Counsel, or practical eugenics” explicitly connects birth control to the “improvement of the race” and advocates enforced sterilization for “the feeble-minded, degenerate and criminal.” Even as the book explicitly references Comstock’s censorship efforts as an obstacle to a scientific attitude toward procreation, its own scientific attitudes unwittingly reinforce his arguments about the dangers of misinforming the public. The fact that a married couple looking to learn about birth control could be subjected to pro-sterilization propaganda shows that the question of sex education is never free of ideology.

Less socially disturbing (and perhaps more amusing to the general reader) were the ways in which shameless erotica was sometimes covered with a thin veneer of scientific “education.” There are many examples in the Gertzman archives where couples are exhorted to learn about “the latest advances in sex,” as if marital relations had undergone a technological revolution—and (in a stern voice that feels very contemporary, ideologically speaking) that a lover ought to purchase the truth about these newest revelations right away, or risk being left alone: a relic of a less enlightened age! 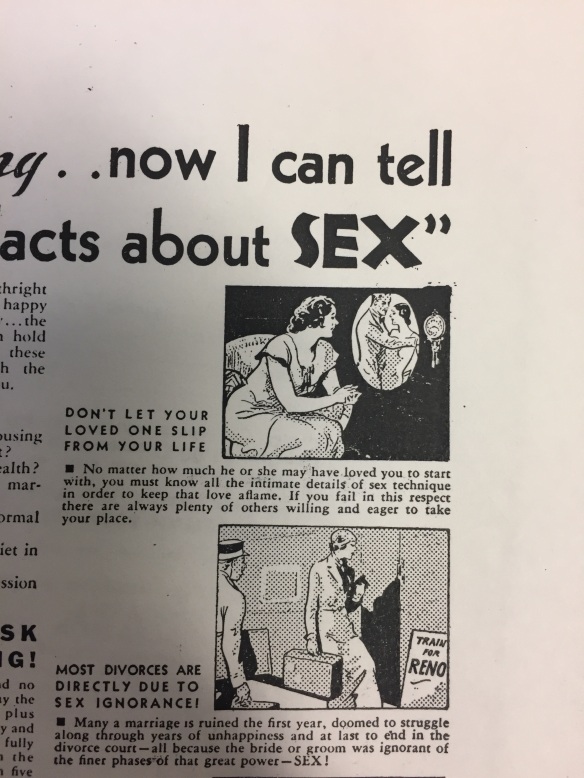 In other situations the subterfuge of “education” was much more obvious. It sometimes took the form of an explanatory expedition into the sexual proclivities of another (often less “civilized”) culture—as if Americans needed to imagine that such behaviors could never take place in a country like their own. 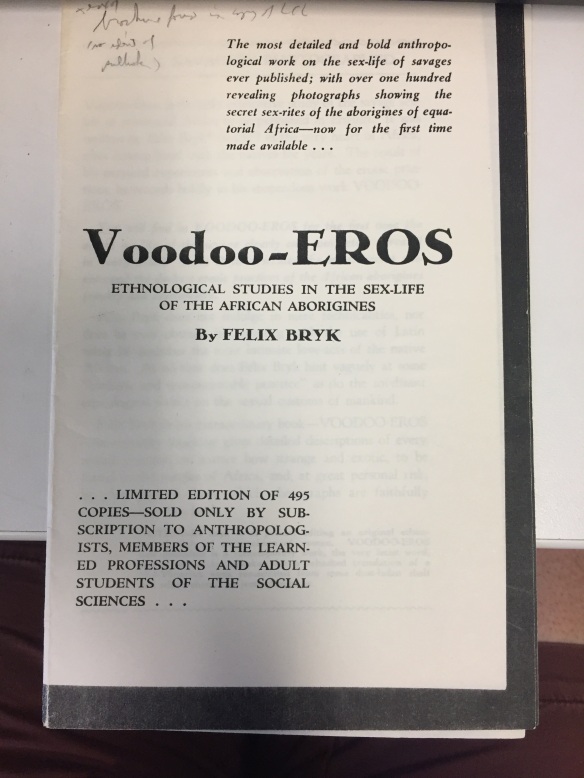 In other cases, the very foreignness of the topic (and its resultant anthropological interest) provided an extra bit of frisson. After all, would Americans have really bought a history of American eroticism?

(How, exactly, the Biblion Society hoped to restrict the sale of Sadism and Masochism to the “medical, legal, and psychiatric professions is unclear.)

After processing the Gertzman collection, I came away with a newfound appreciation for the ways in which the threat of censorship shapes the presentation, marketing, and publication of work that might be considered “obscene.” Over and over, writers and publishers from the early 20th century who wanted to publish material they knew might trouble Comstock and his successors—everything from lurid tales of the harem to sex education for married couples—attempted to highlight the moral and scientific nature of their work. Consequently, these attempts ended up influencing the works themselves, in ways which are difficult to untangle. Did eugenic ideas provide the cover for birth control manuals, or was it the other way around? Were there really dedicated sexologists active in America, trying to find an audience of “medical, legal, and psychiatric” professionals for their research on the history of bestiality? (We may have cause doubt the latter, but who really knows?)