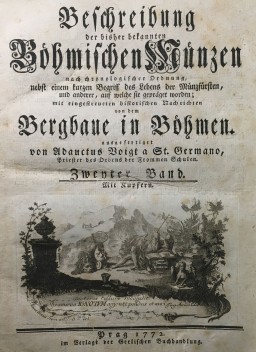 Most people have hidden a little cash in a book at one time or another, and librarians are never surprised to encounter examples of things tucked into books about them, like dried plants pressed in herbals. That said, I wasn’t expecting to find medieval coins laid into an eighteenth-century numismatic handbook, but that’s exactly what happened when I paged through the Kislak Center’s copy of the second volume of Mikuláš Voigt’s Beschreibung der bisher bekannten Böhmischen Münzen nach chronologischer Ordnung (Prague: Gerlische Buchhandlung, 1771-1787). The Piarist Voigt (1733-1787) was a pioneering Czech numismatist who studied the Podmokelský poklad—a hoard of Celtic rainbow cups buried in a bronze cauldron and unearthed by a farmer at Podmokly in western Bohemia in 1771—as well as writing this inventory of then-known Bohemian specie. A previous (unidentified, alas, but possibly 20th-century) owner of our copy of volume 2 laid in four small envelopes containing two thirteenth-, one fourteenth-, and two fifteenth-century coins next to the engraved illustrations depicting them.

The oldest and most fragile of the five coins is a silver bracteate produced under Ottokar II, who ruled Bohemia from 1253 until his 1278 death in battle against Rudolf I, King of the Romans (whose throne he coveted).  Bracteates were a common German penny from the twelfth to the fifteenth centuries; minted for local circulation, these very thin, one-sided coins feature a repoussé image on the obverse. The device on our example, according to Voigt, is “[d]er böhmische gekrönte Löwe mit doppeltem Schweife; auf der Brust das österreichische Wappen” [the Bohemian crowned lion with double tail; on its breast the Austrian coat of arms] (p. 63).

The remaining coins are four Prague groschens, an innovation of the mints of Ottokar’s successor Václav II (reigned 1278-1305). This very popular silver coin was struck from the 14th to the mid-16th century, always with the same design: on the obverse, a central crown surrounded by two legends, the inner containing the current ruler’s name and the outer the motto DEI GRATIA REX BOEMIE (“By the grace of God the King of Bohemia”); on the reverse, the Bohemian lion rampant surrounded by the legend GROSSI PRAGENSES. One of these groschens, much rubbed and clipped, is identified on its enclosure as having been minted under Vaclav II himself.  The outer legend is almost completely wanting on both sides and only the beginning of king’s name—WENCE[…] for WENCEZLAVS SECVNDVS—is visible on the obverse around outline of crown.  A good imagination is required to fill in the missing portions of the double-tailed lion’s anatomy on the reverse. 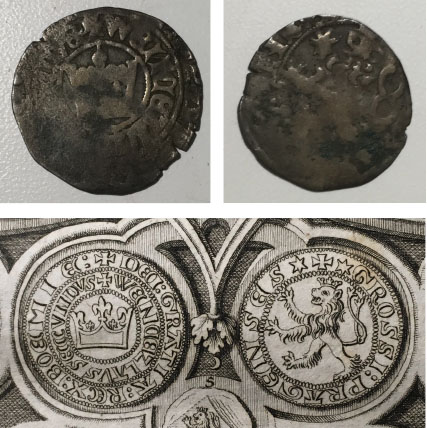 Another groschen, minted during the reign of blind king Jan Lucemburský (1310-1346)—who also perished in battle after insisting that he be led forward to strike a blow against the enemy at Crécy—is likewise worn and clipped, but much less severely. The outer legends on both sides of the coin are largely intact; most of the king’s name (IOHAN[…]ES PRIMV[…] for IOHANNES PRIMVS) is visible, though the crown on the obverse and lion’s torso on the reverse are indistinct.  Its enclosure is stamped in red with the name and address of the Czech coin dealer Karel Chaura (1869-1945), suggesting that this groschen was purchased from his shop in Prague.

The remaining two groschens were minted during the reign of Utraquist Hussite Jiří z Poděbrad (1458-1471), an early champion of a union of European states. Both coins are rather rubbed and one slightly clipped.  On each the crown is partially visible, but the lions (except for their double tails) are predominantly effaced.  Though present, the outer legends are very difficult to read; as for the inner legend, the coins complement each other with the GEORGIVS of GEORGIVS PRIMVS legible on one and the PRIMVS on the other. 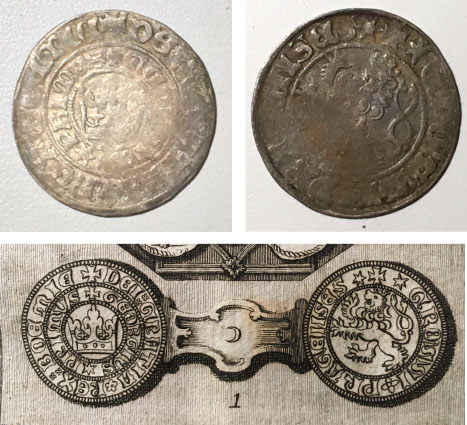 Legend has it that the inhabitants of Podmokly mistook the thousands of gold coins they found for brass buttons.  History records that those coins were confiscated by Karl Egon, Fürst zu Fürstenberg (1729-1786 or 1787), Podmokly’s overlord, who melted most of them down to mint his own ducats.  This much smaller treasure has been spared both misidentification and destruction, to the benefit of Penn’s (and the world’s!) numismatists and historians.