Government sponsored lotteries are not a new phenomenon. The profits generated were used to meet debt obligations, to raise money for military expenditures or to finance the costs of civic infrastructure projects.   In colonial America the earliest public lottery was held in 1745 in Boston Massachusetts.  In 1747, the city of Philadelphia authorized the Scheme of the First Philadelphia Lottery soon followed in 1748 by the Scheme of the Second Philadelphia Lottery, both enacted to raise funds for the defense of the city against French privateers roving the Delaware Bay.

The United States Lottery was established in Philadelphia on November 18, 1776 by the Second Continental Congress as a national lottery to raise funds for the Continental Army fighting in the Revolutionary War. It also served to generate an interest-free loan to the early American government in need of cash. Tickets from the Continental Congress lotteries were issued in four classes with 100,000 tickets printed in each class.

The lottery ticket held at Kislak Center for Special Collections, Rare Books and Manuscripts is an example of an unnumbered remaindered (unsold) third class ticket. The left side stub portion of the ticket is still attached. When a ticket was sold the purchaser’s portion was detached from the stub and the official ticket number was written on the stub as well as filled into the bearer’s box.

This ticket was signed by G. [George] Campbell, one of a number of directors serving on the United States Lottery board. The Kislak copy was trimmed along the bottom edge resulting in the loss of the control letter (in this case “S”) corresponding to the control letter on the still-attached stub side.

The national lottery ultimately proved to be less lucrative than anticipated for the fledgling American government, earning considerably less than the $1.5 million dollars in estimated revenue.

In its nondescript cloth binding, the University of Pennsylvania’s copy of The Works of Publius Virgilius Maro Translated by John Ogilby (London : T. Maxey, 1650) at first appears unremarkable. However, the book’s association with the infamous 19th c. forger Harry Buxton Forman (1842-1917) makes it noteworthy. When this volume of Virgil’s works in the Latin Culture Class Collection was rebound, the binder took care to preserve Forman’s bookplate by affixing it to the title page. 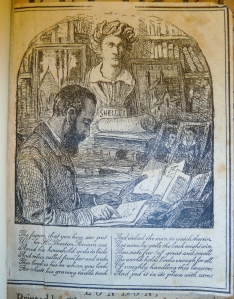 H. Buxton Forman was a respected bookman of his time. He was a bibliophile and scholar, establishing his reputation with bibliographies of Shelley and Keats. During his years of book collecting and literary pursuits Forman developed a friendship with T.J. Wise (1859-1937), also a collector and respected bibliographer. Their friendship ultimately took a criminal turn as they used their combined bibliographic expertise to fabricate dozens of counterfeit works.