Charles-Louis Havas and the Agence Havas

For those who ever wondered how people got news briefs before the modern age, meet Charles-Louis Havas (1783-1858), the founder of what today is known as Agence France-Presse (AFP) Reuters. The wonderful collection of 101 lithographed news reports from 1845-1848 is a terrific example of how international news was shared before modern technology made it easy.

Based on what we found on the internet, Charles-Louis Havas was born in 1783 and after a stint in finance, he founded, in 1825, a news translation business, Bureau Havas, to service the French papers. The concept in the beginning was quite simple. He and his wife, speaking about a half dozen languages between them, could read and translate various international newspapers. His business grew through hard work, acquisition, and government relationships. Havas eventually began to hire international reporters to write original pieces, in addition to the continued translation services, for what became in 1835 the Agence Havas (one of these reporters was Paul Julius Reuter, future founder of Reuters).

An example of what Agence Havas produced: an international news bulletin from 1847.  PRINT COLL. 29

Not only did Havas develop this translation/aggregation model, he innovated news distribution through a subscription formula (selling his news to small papers throughout France). Whether he did well solely due to his wits, guts, and sweat or whether his government relationships allowed him to dominate the distribution of news, he certainly became a notorious figure. Balzac openly accused Havas of having a monopoly in 1840:

“Le public peut croire qu’il existe plusieurs journaux, mail il n’y a en définitive, qu’un seul journal … Monsiuer Havas.”  (The public may believe that there exists a free press, but in reality, there is only one press, Mr. Havas.)

Havas was also different in regard to his interest in advertising – of his own paper but also as a revenue stream. He managed to involve his business in a new advertising model, devoting an entire staff to advertising, paving the way for the merger with Société Générale des Annonces soon after his death.  By that point, the Havas papers were as much about advertising as they were about news, if not more.

Considering the “technology” at the time, which included pigeons, it’s remarkable anyone could develop a business at all. Pigeons were heavily used to share stock market information between London, Brussels and Paris, but more substantial political and cultural news demanded a different carrier. While the railroad and telegraph revolutionized how information was transmitted, it’s still amazing to me that some of the main drivers of Havas’s success are timeless: a strong relationship with the government and an understanding of how to use advertising as an income source.

Muffle that groan! The Penn Libraries acquired several dozen photograph albums, many of which I had the luck to process, and am happy to say beat hands down many of the slideshows I have been subjected to. The common thread in these albums is India from the late 1800’s to the second World War, most often created by military servicemen and women from Great Britain or the United States, but also by some missionaries and other travelers. 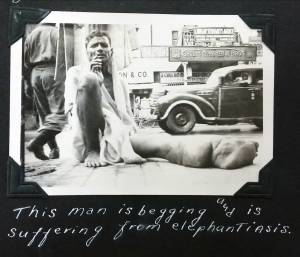 Each album gave a window into the specific experiences of ordinary individuals in a foreign and exotic country. It was amusing to see how well-chronicled tourist attractions were. Almost every album contained the obligatory shot of the Taj Mahal and other local sights. More adventurous albums contained photos of religious rituals like the cremation of human remains on ghats, or the everyday hard work of earning a living as best as possible. Only a few of these visitors were compelled to capture the extreme poverty and afflictions of the poorest Indians.

Some albums solely focused on the military installation or company around that individual and others were clearly photos taken on leave, enjoying vacation trips to Bombay or the mountains. The sporting activities, from polo in private clubs to military “Tug-of-War” teams to hunting expeditions, also appear regularly.

While no one album stood out particularly to me, the story that the collective body of these albums told was a wonderful opportunity to glimpse life in colonial India spanning decades before the Partition, as told by men and women, poor and rich, religious or not, military and civilian. 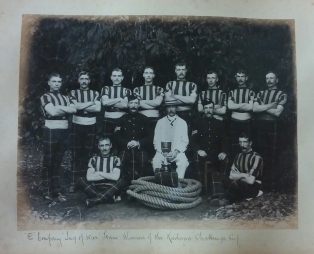 I couldn’t help but wonder how it would compare to a trip I would take today. Has photography changed? Has social media impacted what we photograph? #tajmahal has over 580,000 posts on Instagram – and of course includes selfies, something not found anywhere in the albums. You can’t count the number of hashtags on Facebook, but there seems to be an endless supply of Taj Mahal photos there too. I’m sure I’d be guilty of adding mine… 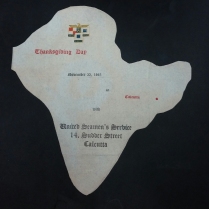