The joy I find in processing family papers originates, to some extent, from the unfiltered perspective one is privileged to enjoy in reading personal correspondence between close friends and family members who may have lived anywhere between 2, 20, or 200 years ago. Maybe it’s the amateur historian in me coming out, but I love the rush of that “aha!” moment discovering the missing connection of who knows who, who’s related to who, and why it all matters.

The Beasley family papers promise not to disappoint. Starting with the first Frederick Beasley (1777-1845), we gain a personal perspective of the man who would eventually serve as Penn’s fifth Provost in addition to his role as Professor of Moral Philosophy, rector in the Protestant Episcopal Church, and loving husband and father to ten children. It is clear that Beasley was a well-liked and amiable member of the community as is stated in this letter from William Jay on March 22, 1842:

“… It is pleasant to interchange ideas with intelligent men, but still more pleasant is it to interchange ideas with men who are not only intelligent, but in whose sincerity & Christian motives we have full confidence. The little collision of opinion also in our correspondence renders it more agreeable to me, particularly as we are both in search of truth.” [Ms. Coll. 1217 box 1 folder 8]

END_OF_DOCUMENT_TOKEN_TO_BE_REPLACED

We’ve all been there. The tightened stomach, the gasps of anxious breath, the lingering guilt of lying about our flossing habits—all due to a friendly, routine visit to our local dentist! While modern dentistry has made caring for our teeth a relative breeze, the journey to this enlightened state hasn’t always been so, well, painless.

Enter Dr. William A. Capon, D.D.S. A Canadian by birth and a dentist by trade, his papers [Ms. Coll. 1222] tell a story of what dentistry looked like in turn-of-the-century Philadelphia. Lecture notes from his studies at the Philadelphia Dental College (now Temple University’s Kornberg School of Dentistry) include entries under courses like “Mechan Dentistry,” “Anatomy,” “Operative,” and “Surgery.” What oral surgery looked like in 1890 when he graduated may have been slightly horrifying by 2016 standards. 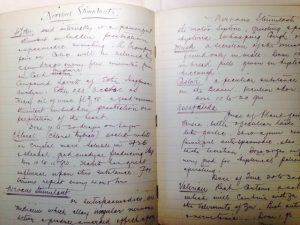 END_OF_DOCUMENT_TOKEN_TO_BE_REPLACED

On July 4, 1944, a routine flight over the Irish Sea ended in the tragic early deaths of six Army Air Corps officers.  Major Howard Myers Scull, a 30 year old flight surgeon with rising career aspirations and close family ties, was unfortunately aboard the fated flight, accounting for one of many non-combat related fatalities during World War II.

Although his life was cut short in its prime, we get a glimpse of his daily life throughout medical school, military training, and active duty while stationed in England through diaries and letters written to family and friends. (Ms. Coll. 1208, Howard Myers Scull papers, 1896-2015 [bulk: 1936-1944]) It doesn’t take long to discover that he was a popular, handsome, and successful physician with close friendships and various girlfriends. 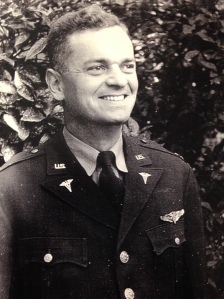 Scull attended medical school at the University of Pennsylvania between 1935-1939, giving readers a colorful view of his world as a student with lively diary entries: “November 17, Tue [1936]: Best news in a long time. X-ray negative. Fears unfounded. Gene better. Life is good! Work in library in P.M. Autopsy in A.M. Tuberculous meningitis with interesting spinal fistula. I posted the lungs. Saw the tail end of a terrible sarcomatous, gangrenous, ulcerative dialectic foot. A most awful stink! And a hideous sight!”

After completing his internship at Presbyterian Hospital in Philadelphia, Scull immediately entered the Army and was stationed at various bases around the United States before receiving notice of his call to foreign duty in 1942: “Dear Fred & Ella … This is the letter I guess I have hoped I’d never have to write. We got news this A.M. of a permanent change of station in less than two weeks. First we go to Fort Oglethorpe, Ga. to take the place of the 6th Cavalry moving to foreign duty. Then we shall follow them shortly. I can’t tell you where. I think I shall now ask for transfer to the Air Corps but it is rather unlikely now that I will be released from this Regiment.” [letter written to his brother and sister-in-law, dated Feb. 2, 1942, Monday noon]  His request was eventually granted, and after completing officer training at Maxwell Field, Alabama, he was sent to Mac Dill Field, Florida, as an Army Air Force physician.

By January of 1943 his honest musings about a love affair with a woman in Tampa, Florida, led him to make a strikingly accurate prediction in a letter to his family:

“About Jane Price – no, it really hasn’t happened to me. I don’t love the girl & doubt if I ever shall. I think a great deal of her, she is very worth while, sweet, has many virtues – would make an excellent doctor’s wife – unhappily she has told me that she is in love with me – unhappily, I couldn’t truthfully return that statement – and didn’t.
Do you remember the time I told you I had a premonition that love – a real love – might never be mine – again. I’m afraid that is going to be true…” [letter dated 1/24/1943, Sunday night]

Scull’s last letter was written on July 3, 1944, with the opening line: “Dear Family … You are indeed a grand family to write me so often – even tho the conditions which you suppose for me do not exist, I appreciate it none the less, believe me.” His obvious affection and admiration for his father, brother and sister-in-law, sister, and nieces make this collection an enjoyable read and gives an intimate firsthand perspective of the hopes and fears of this medical student-turned-Army Air Corps physician during the 1930s and 1940s.

“O Maddest of Poodles,” “O mighty brain,” “Master of Mania,” and “Dr. Poo” – only a few examples of the various terms of endearment used by poet, translator, and professor Stephen Berg during his ongoing correspondence with fellow academic Seth Fagen. During the late 1980s into the early 1990s, we are privy to a glimpse of the personal letters Berg sent to Fagen in this collection (Ms. Coll. 1211, Stephen Berg letters to Seth Fagen, 1983-2002) as they both wrestled with professional triumphs and defeats and personal issues.

Berg’s poetic nature shines through his often wild constructions with brutally honest musings to his friend and colleague who he offers advice as he would a son more than twenty years his junior. Despite the age difference, it is clear that the two writers had a natural connection which allowed their relationship to grow although Berg was based in Philadelphia and Fagen lived in Massachusetts and New York City during the length of their correspondence.

Although Stephen Berg was best known for his editorial role at American Poetry Review and his long tenure as Professor of English at the University of the Arts in Philadelphia, these elements play only a minor role in the letters to Fagen. Instead, we quickly learn about Berg’s penchant for Japanese Toshiko bowls, a good martini, his love for cycling (in one letter he boasts of his trek from Manayunk to Conshohocken with aplomb), and the endless search for reasonably priced stylish glasses.

References to his current writing projects pepper the scrawled pages of the letters as well, sometimes with self-proclaimed praise below the body of the message: “PS … This one is probably good enough to qualify as a sketch for a masterpiece” [12.07.1990]. Praise is also doled out to Fagen with writerly glee: “About your letter: the syntax is brilliant, too, like fresh pond ice” [11.18.1990]. It is clear the author didn’t have an ego problem.

One of the funniest letters of the collection centers around advice Berg shares with Fagen as he enters middle age:

“Items to stock up on now that you have entered middle age … Neutrogena Norwegian Hand Cream … Ella Freeman Sharpe’s book Dream Analysis … suspenders … Cashmere mufflers only … carry silver flask of cognac at all times just in case … stop buying in Filene’s basement and switch back to Brooks regular store … give up wearing loafers in public … begin having power lunches under the guise of friendly desire … make home movies of yourself cooking and watch on your Sony … LL Bean comfortor [sic] for bed … watch major golf tournaments on TV … enclosed please find perfect metaphor for the above condition” [12.16.1989]

Readers won’t be disappointed as they comb through these letters which provide a unique viewpoint of the publishing world, the joys and annoyances of academic life, and an intimate view into the friendship of two men with strong opinions on just about everything.