In 1870, children’s writer and translator Henry William Dulcken – best known in England for his translations of Hans Christian Andersen’s stories – published in London and New York an educational book titled Animal Life all the World Over: With Remarks On the Trees and Plants of Various Regions. As the title suggests, the book describes the aspect and life of the fauna from the four corners of the earth, with the help of a gallery of splendid hand-colored illustrations depicting animals, plants, and the landscape in which they live.

The first page of the copy of Henry William Dulcken’s Animal Life All the World Over held by the Kislak Center for Special Collections. A dry flower, probably included in the volume by its previous owners, can be seen on the left.

All this, of course, was done from the perspective of a man writing from the metropole of the most powerful colonial empire of the time, just a few years after Charles Darwin had presented his evolutionary theory to the world with his On the Origins of the Species. One, then, should not be surprised to find references to the glorious Kings and Queens of Western Europe, and to read at the same time hopeful passages about the “happy time when… among the benighted people” of Central Africa “the knowledge of the [Christian] truth shall have penetrated.” We can tell many things about the founding values of a society from the way its youth are educated, and in this sense, Dulcken’s book is a valuable witness of the Victorian past.

Almost a century and a half later, the book is not so easy to find of the shelves of American and European libraries. But the only copy of it held by the University of Pennsylvania, now part of the Charlotte Cushman Club records, is truly unique, because it tells us as much about its owner (or its owners) as it does about its content.

A page from the scrapbook. What appears to be an autograph by Edwin Forrest can be seen in the bottom part of the page.

Sometime at the end of the nineteenth century (we don’t know precisely when), somebody (we don’t know exactly who) turned her/his copy of Dulcken’s book into a scrapbook. The gatherings that formed the original book, all of which are still present, were separated, reshuffled, and then rebound in a new volume also including a few photographs, and several clippings of disparate subjects, but especially of theater reviews, poems, proverbs, jokes, and obituaries.

The scrapbook as it appears today

These added pages include oddities and precious souvenirs, such as an engraving depicting Chicago after the great fire of 1871, a seemingly original autograph by legendary actor Edwin Forrest, and a macabre “bouquet of game” with dead birds of any kind. Two presidents, Abraham Lincoln and James Garfield – both assassinated – are remembered by poems written in their honor at the time of their death.

“A bouquet of game” included in the scrapbook

Identifying the author and the owners of the scrapbook is a challenging endeavor. A possible hint comes from an obituary pasted in the first pages of the volume, next to a group of poems in honor of President Garfield. The person being mourned is Aurilla B. Drew, born in 1800 in Providence, Rhode Island, and died in Philadelphia at the age of 87. Over the clipping, an unknown hand specifies that Aurilla was “great grandma Drew.” Did the book belong to a descendant of Aurilla? It is hard to say, although the last name Drew constantly recurs in the scrapbook, mostly in connection with a certain I. N. (or J. N.) Drew, an actor member of the successful Richmond and Von Boyle Comedy Company. He could have been Isaac Newton Drew, one of the eleven children of Aurilla Drew (whose maiden name was Aurilla Virginia Bartlett) who died while traveling to Washington, D. C. in 1899, as also reported by a clipping found at the end of the scrapbook. It is certain that did not belong to another Drew family also mentioned in the scrapbook, that of John Drew (1827-1862), an actor from Ireland and father-in-law of Maurice Barrymore, himself an actor and patriarch of a famous acting family. 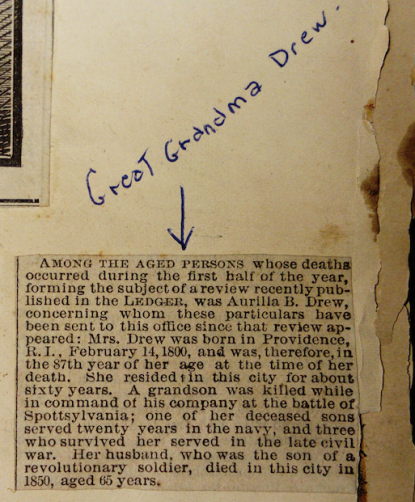 One of the youngest members of the Barrymore family, actress Drew Barrymore, carries in her first and last name the weight of 150 years of American theater.

And what about the obsession with murdered presidents? Theater has a lot to do with at least one of them, Abraham Lincoln, who was famously – and very theatrically – killed by actor John Wilkes Booth while he was attending a play at Ford’s Theatre, in Washington D. C. History has it that after Booth fatally shot Lincoln and fled the theater, actress Laura Keene, who was on stage, reached the presidential box and cradled Lincoln’s head on her lap. The blood of the dying president stained the dress of the actress, making it a relic to be exposed in museums – it is currently on display at the National Museum of American History – or to be photographed and reproduced in the form of postcards and other printed mementos. One such postcard, printed in Springfield, Illinois, was placed between the pages of the scrapbook along with some unrelated clippings, and what seems to have been a red rose.

Postcard with a picture of Laura Keene’s blood-stained dress

In hindsight, this memorabilia (and, all in all, the scrapbook itself) seem to have to do with a certain idea of theater as a dignified, “high” art, one that clearly began to emerge in the second half of the nineteenth century – and of which the Charlotte Cushman Club, the institution that donated the scrapbook to the Kislak Center, was direct expression until a few decades ago. Perhaps Dulcken’s volume, after having served its function as a children’s book, was deemed not too important by its owner, and was subsequently used as a mere support to document with an almost religious zeal not only the career of many women and men of theater (Isaac Newton Drew and John Wilkes Booth, but also Edwin Forrest, Charlotte Cushman, and Laura Keene), but maybe also the genealogy of a whole family. 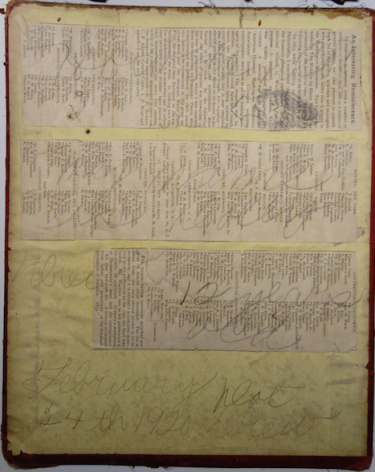 A caption handwritten in the back pastedown of the scrapbook

And yet, a caption penciled on the back pastedown of the book reveals that the scrapbook – animals, dead presidents, blood, and all – may have, after all, been used (assembled? inherited?) by a young reader: “my name is Molly, herein 12 years old. February 24th, 1920.” The circle is closed: a children’s book transformed into adult matter returns to childhood again.